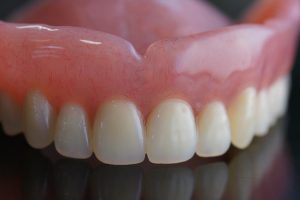 Getting new dentures means you have to pay closer attention to the foods you eat. Initially, this may seem like a challenge. Trying out various recipes before you go to get them put in can make you feel more prepared and at ease. Here are a couple ideas for soft, tasty meals:

You can try Split Pea Soup. For this recipe, you’ll need a slow cooker and a number of ingredients on hand. You should have:

-One teaspoon of salt and pepper

-Four or five cups of chicken broth
You can begin by chopping carrots, onions, and celery. After that, you’ll toss them into the slow cooker pot, along with your minced garlic. Once you’ve done that, you can add in some fresh Italian parsley, thyme, and a bay leaf. Then, you can sprinkle a teaspoon of salt and pepper over them.

Next, you’ll want to place the ham in there. At this point, enough broth should be provided to completely cover the vegetables. You’ll want to add the rest of the broth to the slow cooker later when your soup is almost finished cooking. The food should then be cooked on the low heat setting for eight to ten hours. You’ll want to make sure you give it a few good stirs throughout that time. The soup should be creamy with a thicker consistency.

-One head of fresh garlic

-One cup of onions

-One cup of milk

-Salt and pepper to taste
First, you’ll want to preheat your oven to 375 degrees. Once you’ve done that, you can get started by cutting off the top part of the garlic and peeling off the outer layers of it. After a small amount of olive oil has been drizzled over them, a little salt and pepper should be added. At this point, you’ll need to fold aluminum foil over the garlic and place them on a baking sheet. The garlic should be kept in the oven for a total of forty or forty-five minutes.

Next, you’ll melt the butter in a dutch oven on a medium heat setting. The onions should then be added in there and cooked for about four minutes. The flour will need to be cooked for one minute before the broth, milk, cream, thyme, salt, and pepper are included. The mixture should come to a boil and will then need to simmer for three minutes. In the meantime, it should be whisked several times. You can then add the previously peeled and boiled potatoes, followed by eight or nine of the roasted garlic cloves and parmesan cheese. A blender will make it smooth in consistency. The final step is topping the soup with parmesan cheese, crackers, and sliced scallions.

Having new dentures doesn’t mean you have to survive on yogurt and applesauce. You can still enjoy great meals. These recipes serve as perfect reminders of that.

Interested in denture repair? Ask us about a free consultation.

Font Resize
Contrast
Accessibility by WAH
Call Us Text Us